Some small things about Nepal

I wake at 5am. My neighbours have woken the last two mornings at 5:30am; I’ve been roused by a low male voice talking at full strength through the thin walls of the 5 star Hotel de L’Annapurna. I don’t know if he’s talking to someone else in the room, or on the phone, or? So this morning, I’ve pre-empted that – I guess I’m staying on Australia time for now, 5 hours later. I switch on the light, get up. When I look back down at my bed, a small brown bug in high contrast to the white sheets scurries along. Cockroach? Bed bug?
Later, there will a blog 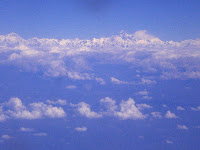 post about about my overall impressions of a place I’ve wanted to spend time in, my amazing colleagues, the sites I hope to see. But for now, the small things. As I’ve been in meetings for 2.5 days and have seen little:
I was lucky enough to remember to request a seat on the right-hand side of the airplane as I flew into Kathmandu from Bangkok. I had no idea what to expect, and how beautiful it would be, to see the mountains floating on top of the clouds.
Thai Airways, one of the two Asian airlines that fly into Nepal from Sydney, provide their own version of the customs declaration form for arrival. I loved it. Among the non-consumable items that you are allowed to bring are: Used Portable Music System One Set and Recorded or Blank Cassettes up to 10 pieces; Tricycle 1 piece; Used Fountain Pen One Set. Ball Pen or Pencil One Set; Used Simple Medical Equipment One Set for Doctor; One Set Playing Item for Player; One Set Musical Instrument For Musician; Fishing Rod; Perambulator 1 Piece. Passengers having more than the given quantity are required to proceed to the Red Channel. Dear Reader, I lied. This artist of deception smuggled through my three ball point pens and headed out through the Green Channel.
Outside the terminal, the taxi touts are omniprescent but wander away when I say that the hotel is sending a pick-up. At the ATM machine, I ask for more than the daily limit. I punch in a reduced request, and a women security guard appears suddenly through a door to the side of the machine. “No, no,” she scolds, but I can hear the whir and buzz of a successful transaction. At the hotel room, I see that I received 8,000 instead of 10,000 rupees. You have to admire an ATM machine that gives it what it wants to give you, rather than what you ask for.
The hotel is familiar, the same that I stayed at on my visit in 2005 (painfully short, with little time for sightseeing, I literally had to jog around the famous stupa here to get back to my waiting driver). Traveller’s tales often end in the toilet; I won’t diverge. I love the bottle water they’ve left for me there. “Thirst-Pi”. Named by an admirer of mathematics, or is Pi an allusion to Pee? It was the winner of the internatonal quality award for commercial prestige, in Italy, in 2002. Which I suppose it reassuring. I’ve heard many times over the years of how the western position for toilets is unnatural; squatting is better. This one seems to combine the two. The plastic seat slopes back so that I feel like I’m wedged in place. Neither comfortable nor natural. Comical, I’d say.
I’m gifted with a week in Nepal this time, before the next meetings in Delhi. Unusually for me, I haven’t planned what I’m doing! This morning, I’m visiting a colleague in the hospital, and will visit three organisations during the day. I’m considering going to Nagarkot tomorrow evening, which will then allow me a famous sunrise view. I might as well take advantage of the time I’m waking up!

This entry was posted in Creative Non-Fiction, Travel. Bookmark the permalink.