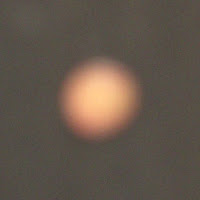 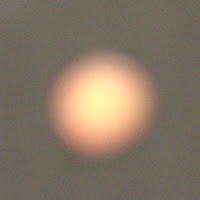 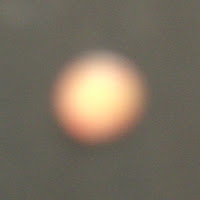 So, the blood red eclipse was on the front page of all the papers here… It was visible from early in the evening for a few hours, and it was apparently spectacular.

It was a great view of it with clear skies on a bright warm summery night, and it only comes around every 10 years or so.

Sadly, I missed it. I was preparing dinner for my friend Penny and there wasn’t an easy place from my apartment to go and see it, so I was lazy and stayed in, and then regretted it after, since those who saw it said it was really really beautiful.

So, perhaps you’ve gathered that these are not, in fact, photos of the eclipse. What is it, for god’s sake? Here’s a clue… 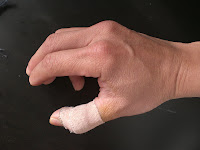 (Really, the truth is whenever I get an idea for a blog or an e-mail, I’ve always forgotten the first step. If I want to show the difference between before and after, I have to remember to take the “before” shot.

So, when I was sixteen, my college friend Trish told me, “that wart on your thumb, you should get it looked at. They could be contagious.” I’d never really thought about what this bump on my thumb was. It had been around for a while, I remembered that, but I never thought of trying to figure out what it was or get rid of it. A wart? Bleh. At the time, in the late 80s, the only thing they sold in pharmacies was a wart remover solution. I bought some and tried it, and it didn’t seem to do anything. Perhaps it wore away a layer of skin or two. 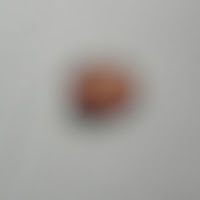 After that, I gave up for a while. If it grew, I would gnaw or peel it down, but otherwise, let it rest. After coming to Australia in 1999, I do remember asking my doctor about it. He brought out liquid nitrogen from the freezer which made a satisfying sizzle on my skin as the applicator pressed against my wart. It seemed to have more effect but not a lot, and I thought that paying $50 per visit and uncertain success was not so appealing.

Last year, I turned my thoughts to it again. Technology must have changed. And indeed it had. Pharmacies now sell a home-kit, similar to liquid nitrogen. I tried it out, and my wart noticeably reduced, layer by layer. But not completely. After a few months of this, my friend Tim recommended the bright blue podophylotoxin liquid, which also seemed to work, somewhat, but not completely.

After trying for 3 or 4 months, my doctor boyfriend said: why don’t I just cut it off for you? My re

gular doctor was rather against this solution when I casually mentioned it to him during a check-up.

Time flies. We never found time to do it. Until today. It came out in a perfect little intact form, a round blood moon, which by the time I got home to take these photos was rather flattened out. I think it’s kind of pretty, don’t you?

I find it kind of amazing that I don’t have it anymore, after about 20 years.

I’m quite interested to see the little divot in my thumb after I get to take off my bandage tomorrow. In the meantime, I wrote a p oem earlier this year. About my wart. Which is a good way to link this slightly offbeat blog entry to what this blog is supposed to be about. Writing.

Rubbed a frog the wrong way, I reckon

only noticed when Trish beckoned,

right-side, top of my thumb joint,

I watched salicylic acid wear off its thin pages,

asked various doctors to get from their dens

it burnt into my skin, a satisfying hiss

but would still not desist

turned towards another wind

ignored it as its cells thickened

through my twenties and beyond.

technology finally caught up with me

I froze off layer after layer

settled into a drawn-out guerre

and painted it with podophyllotoxin

its primary use on vaginas and cocks, an

not something you’d want to admit to

but I expect magic if this dance, she

this extra button sewn onto my finger

unfasten it, I shed my pale grey tunic

become princely, the opposite of eunuch. 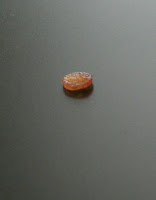 This entry was posted in Poetry, Wart. Bookmark the permalink.